Please spread the word! 100% of the money raised will go towards furthering our cause.

Watch Ricky Tomlinson’s video about our appeal on YouTube here.

This workshop launches Risky Hormones, an internationally collaborative research project based in Berlin and Glasgow. For the next three years, the project will work closely with patient groups and an international team of researchers to historically investigate the contested use and regulation of prescription drugs in pregnancy and the risk of birth defects in the post- thalidomide world.

Primodos, a hormone-based pregnancy test, was given to women between 1959 and 1978. Its development occurred before GLP and before standardized testing for teratogenesis (causing birth defects). There are data and suspicions that it caused birth defects, but more questions remain.

This episode of Inside Out Quality explores the story of this in vivo diagnostic with Dr. Neil Vargesson, from the University of Aberdeen, Scotland, UK. Learn another reason for the importance of Good Laboratory Practices and why pre-clinical studies are key to keeping people safe.

Sky News interview with Marie Lyon on 8th July regarding the IMMDS Recommendation. Click to watch

We are delighted our Chair attended the initial hearing of the proposed legal action against the UK Government, the manufacturers of Primodos and Amenerone Forte. This marks another significant step towards justice for our families.

Barrister Charles Feeny will be presenting our legal case in Liverpool Civil and Family Court, Vernon Street, Liverpool, on Thursday 22nd April. Marie Lyon will attend the virtual hearing which starts at 10.30 a.m. and lasts for a full day. Mrs. Justice Yip has been allocated as the judge that will see our case through to trial.
We are delighted that such positive steps continue to drive our fight forwards. Thank you PGMBM for your determined support.

16 Dec ’20 : We are delighted that our legal representatives PGMBM will serve Particulars of Claim, on behalf of ACDHPT, on 4 Defendents on Friday, 18th December, 2020.

The Defendents are: Bayer Pharm AG. Schering Health Care Ltd. Aventis Pharma Ltd. and the Secretary of State for Health and Social Care. This is a significant event for the Association for children damaged by HPT’s which we hope will bring to an end the long campaign for justice we have fought for more than 40 years.

28 Oct ’20 : Keir Starmer has added the full weight of the Labour Party by adding his signature to a letter sent to Boris Johnson yesterday :

The letter was signed by every Opposition Leader and urged the Prime Minister to instruct the Department of Health to implement the findings in the Cumberlege Review *First do no harm*. The recommendations contained in the IMMDS review, are crucial to the safety of patients in the U.K. and we thank Keir for his welcome support.

Please read the heartfelt plea to Prime Minister, Boris Johnson, signed by all Party Leaders, but sadly without the signature of Sir Keir Starmer. We hope Sir Keir intends to write separately to the P.M. to ensure the life changing recommendations from Baroness Cumberlege, to improve our Health Services for everyone, are implemented” We have always appreciated the support from the Labour Health team and many dedicated Labour MP’s and regret we did not receive a response from Sir Keir.

Click the image of the letter below to read the whole letter: 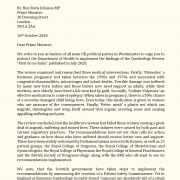 The former PM tells Sky News that Primodos campaigners “deserve to be treated fairly” and “weren’t listened to”.

The German Federal Ministry of Health has announced it will launch a review into the pregnancy test drug Primodos, which is alleged to have deformed babies.

In an exclusive interview with Sky News, the former prime minister, heavily criticised the health regulation system that also allowed people to suffer with another drug, sodium valproate, and the medical product, vaginal mesh.

Mrs May praised campaigners, who had been “beating their head against a brick wall of the state”, she said.

She also criticised former governments and healthcare professionals who she said had tried to “stop them in their tracks… saying that ‘you didn’t really suffer’ despite the fact that there was obvious evidence”.

The Sky Film, Bitter Pill, will be released on 24th August, on the Sky Documentaries channel at 9.00 p.m.

The Association for Children Damaged by Hormone Pregnancy Tests (ACDHPT) is campaigning to expose the truth about the failures of both past and present Government Regulatory Agencies and the continuing cover up by the drug company Bayer/Schering.