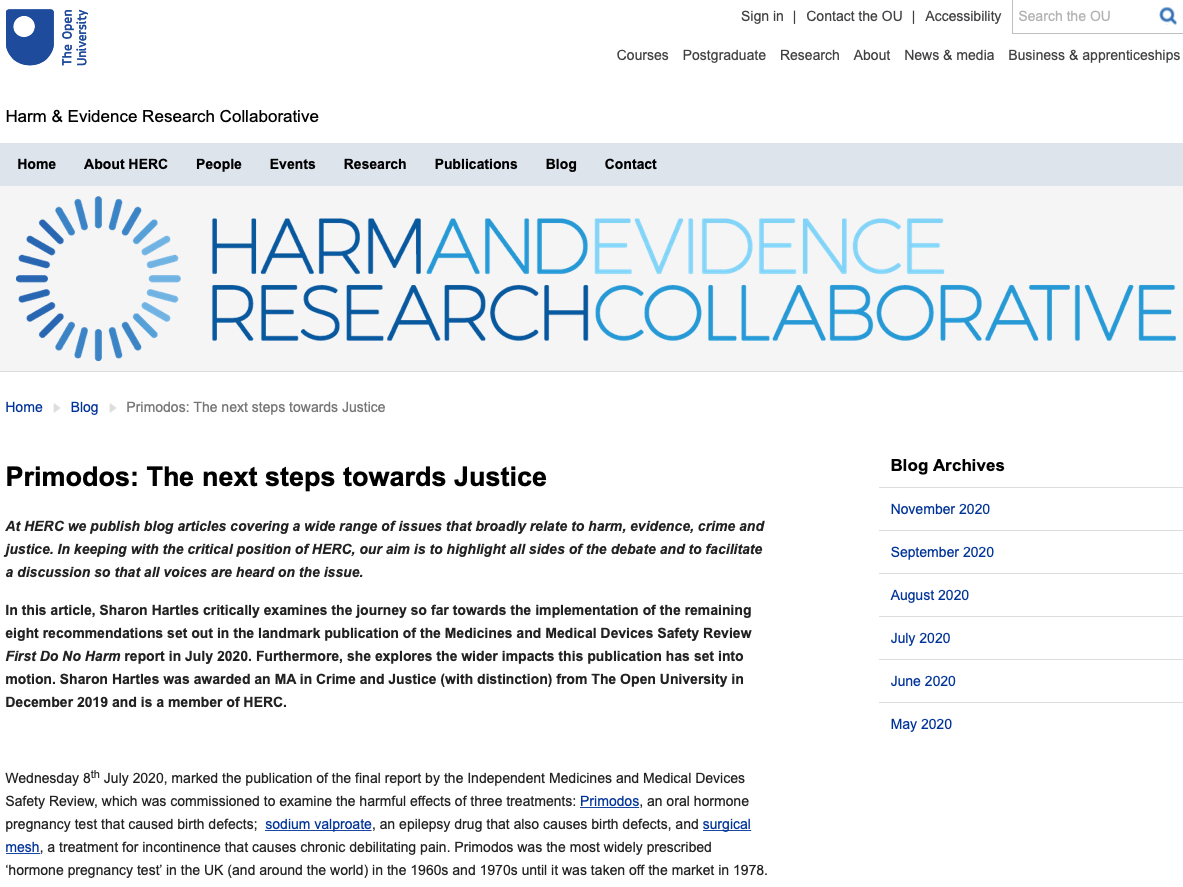 Primodos: The Next steps towards Justice

HERC: In this article, Sharon Hartles critically examines the journey so far towards the implementation of the remaining eight recommendations set out in the landmark publication of the Medicines and Medical Devices Safety Review First Do No Harm report in July 2020. Furthermore, she explores the wider impacts this publication has set into motion. Sharon Hartles was awarded an MA in Crime and Justice (with distinction) from The Open University in December 2019 and is a member of HERC.

Wednesday 8th July 2020, marked the publication of the final report by the Independent Medicines and Medical Devices Safety Review, which was commissioned to examine the harmful effects of three treatments: Primodos, an oral hormone pregnancy test that caused birth defects; sodium valproate, an epilepsy drug that also causes birth defects, and surgical mesh, a treatment for incontinence that causes chronic debilitating pain. Primodos was the most widely prescribed ‘hormone pregnancy test’ in the UK (and around the world) in the 1960s and 1970s until it was taken off the market in 1978. First Do No Harm found that avoidable harm was caused because the UK Government and the Healthcare system failed in their duty to protect patients and regulate Primodos.

For the Primodos-affected members of the Association for Children Damaged by Hormone Pregnancy Tests, a lobby group, the findings and recommendations offered recognition ‘that hundreds of families have been wronged.’ Recommendation 1 of First Do No Harm was fulfilled when Matt Hancock apologised for the avoidable harm caused to those who suffered. However, after this welcomed and prompt first step towards justice, the next steps – the implementation of the remaining eight recommendations – have been fraught with resistance.

Baroness Julia Cumberlege, a life peer who chaired the Independent Medicines and Medical Devices Safety Review, explicitly championed the need for the recommendations set out in First Do No Harm to be implemented with determination and urgency. Despite this, it has now been more than three months since the report was published, which may not seem like much time within the political agenda, and given the preoccupations with Covid and Brexit, but England is lagging behind Scotland. At a 9th July 2020, press conference, Julia Cumberlege raised concerns about the importance of implementing the report’s recommendations and the significance of not leaving it to “sit on a shelf and gather dust”.